When founder, Peter Pretorius, was left stranded in Pambarra, Mozambique, he witnessed the horrific consequences of starvation with children dying every day around him. Along with his wife Ann, they committed their future to join the fight for a better future for Africa’s children.

Today, JAM’s growth as an aid and development organisation closely mirrors the strong development progress in the countries in which we work: Angola, Mozambique, Rwanda, Sierra Leone, South Sudan, South Africa, and Uganda. From initially only providing lifesaving nutritional relief in one country, JAM has grown to provide localised programme interventions to assist the needs of many developing nations in Africa.

When founder, Peter Pretorius, was left stranded in Pambarra, Mozambique, he witnessed the horrific consequences of starvation with children dying every day around him. Along with his wife Ann, they committed their future to join the fight for a better future for Africa’s children.

Today, JAM’s growth as an aid and development organisation closely mirrors the strong development progress in the countries in which we work: Angola, Mozambique, Rwanda, Sierra Leone, South Sudan, South Africa, and Uganda. From initially only providing lifesaving nutritional relief in one country, JAM has grown to provide localised programme interventions to assist the needs of many developing nations in Africa.

Below is a look at some of JAM’s significant milestones over the past three decades, across three African countries in which we work. 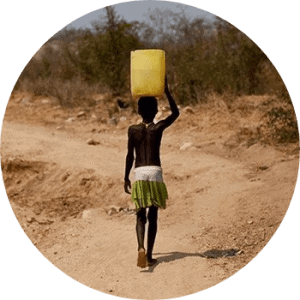 1984: The Beginning of the Journey

Following the Mozambican government’s plea to the international community for urgent humanitarian relief to help combat a famine that had placed nearly four million people at risk of starvation, Peter Pretorius was one of the first people to respond to this call. He visited Pambarra Village near Vilanculos, Inhambane Province, to see how he could contribute in the emergency. Peter was meant to be on the ground in Mozambique for a day and he was left there for 10 days with no food, water, or supplies. He witnessed death, despair, and misery in the deepness of poverty in that community. Up to 30 people died of starvation every day, leaving so many children orphaned.

This experience changed something in Peter and he and his wife Ann resolved to do something to alleviate the situation. JAM was born as a Nutritional Feeding relief-focused organisation. JAM’s first shipment from South Africa was 80 tons of supplies to Pambarra.

1985: Soup kitchens were established in the towns of Maputo, Beira, and Pambarra in Mozambique where JAM fed 9 500 children each week.
November 1985: Peter Pretorius signed a contract with Joana Manque, who was the Director of Social Action Ministry of Mozambique, to build an orphanage that would accommodate 300 orphans in Pambarra, Inhambane Province, Mozambique.
1986: Peter’s father, Isak, led the construction of the orphanage.
July 1987: Children began moving into their new homes at the orphanage. The orphanage was 30 homes that housed 10 children in each.
December 1987: Mozambican President Joaquim Alberto Chissano visited the orphanage with Ambassadors from the US, UK, and East Germany. This visit greatly enhanced JAM’s profile in Mozambique and abroad.

1991: JAM was invited by the Angolan government to assess the need for providing Nutritional Feeding to thousands of hungry Angolan children.
1992: JAM began doing Nutritional Feeding at Lobito, Benguela Province in Angola. During the first year that JAM was in Angola, 12 000 children were fed daily in villages.
1993: JAM was able to transition from village feeding to doing school-based feeding in Mozambique.

1994: Following the Rwandan genocide, Peter traveled to Rwanda and to the Democratic Republic of Congo. In the DRC, he met Fred Nkunda at a refugee camp where Fred was caring for hundreds of orphans. Land was donated to JAM by the Rwandan government and plans were made to build an orphanage.

1996-1998: Building our Capacity through Adversity

1996: The building of the orphanage in Rwanda began. Unfortunately,
Fred passed away before the orphanage was completed.
1997: JAM built a food production factory in Lobito, which produced 1 891 tons
of food that year to feed a total of 55 000 children.
1998: The escalation of the war in Angola made it a difficult year for JAM, and
we were able to feed only 38 000 children.

2000: After the setbacks in Angola during 1998, JAM’s feeding numbers increased annually, from 79 500 children in 1999 to 98 000 in 2000.
2001: JAM began operations in Boma, Jonglei State in Sudan (now South Sudan). We also began drilling water wells in South Africa.
2002: JAM started an eight-year programme drilling water wells in South Sudan. In that year, when the Angolan war ended, JAM operated school feeding at 114 schools and 54 malnutrition centres, which resulted in 111 613 children being fed in Angola. In Beira, Sofala Province, in Mozambique the construction of a new food factory began.
2003: JAM continued to grow and partnered with the World Food Programme in Mozambique and Angola. This led to the expansion of our programmes into the Manica and Gaza Provinces in Mozambique. JAM was also able to expand into the Cubal and Ganda Districts of Benguela Province in Angola.

2006: JAM moved from working in Lobito town to working in Benguela town, still in Benguela Province, Angola. A new JAM operating base was built after land was donated by the local government.
2007: JAM secured the McGovern-Dole Grant through the United States Department of Agriculture (USDA) to expand School Feeding programmes in Mozambique. School feeding numbers dramatically increased from 2006 to 2007.
2008: JAM adopted a Complete Community Development Approach (CCDA), a holistic approach to tackling development issues. In this way, JAM made the transition to being a development agency. The vision of Helping Africa help itself came to life.
2008/9: In 2008, JAM partnered with the WFP in South Sudan to distribute food to 39 additional schools under the Food For Education (FFE) Programme. Implementation of the programmes begins in 2009.
2009: The McGovern-Dole Grant, this time around for programmes in Angola, was signed with the USDA.

2014: JAM celebrated its 30th year of operating in the humanitarian and development sectors with notable progress at the PLC Farm in Mozambique. We initiated and implemented our FEED programme (Farm, Empower, Enhance and Distribute). Inputs from the entrepreneural farmers to the School Feeding food production shows promise. We continue our work in South Sudan, continuing to bring relief to the war-torn nation. In Angola, we established greater partnership with government making our work there more sustainable.
2015: In Angola, JAM implements needed feeding interventions at six malnutrition clinics in Benguela Province, with daily school feeding at 146 schools, and over 100 water wells drilled. In Mozambique, 34 entrepreneural farmers are established in partnership with the German Embassy and our new School Gardens Programme is implemented at selected schools. In South Sudan, we sign agreements with the UN and start our malnutrition prevention programme in Jonglei state.
2016: Aware of the increasing needs in South Sudan, we continued to pursue opportunities to assist even more people, with an increased focus on partnerships throughout the region. Our programme in South Africa grew significantly, reaching close to 100 000 children. Entrepreneural farms with full irrigation were developed for local farmers in Mozambique. In Angola, tens of thousands of school children continue to benefit from our nutritional feeding, and almost a hundred safe water wells are drilled.
2017: Angola’s new President, João Manuel Gonçalves Lourenço, is elected and JAM continues to implement our Water Sanitation and Hygiene programme (WASH), and Education and Nutrition programmes in Benguela. In Mozambique. JAM responds to government’s call for urgent humanitarian assistance in the wake of heavy seasonal rains and displacement of locals. Meanwhile, JAM’s school upgrades and feeding, as well as farming projects, continued to show positive results. The beginning of 2017 saw an upsurge of fresh conflict and new internal displacement in a few locations in South Sudan. Despite these tragedies, JAM continued to strengthen our partnerships with key UN partners and roll out much-needed assistance to tens of thousands of affected communities.

Angola remains one of the countries with the highest rates of malnutrition and JAM continues to make a difference through nutrition and WASH interventions in some of the most vulnerable communities. South Africa drives the agenda for nutrition and education in early childhood as a means of giving children in vulnerable communities a better start in life by providing nutritional meals and creating better learning environments. Rwanda reaches hundreds of children each year with subsidized vocational skills training to benefit underprivileged children. South Sudan programme experiences a semblance of political stability following the most recent peace agreement signed in August 2018. JAM continues to meet the desperate humanitarian needs faced by millions of people affected by years of brutal conflict through food assistance and livelihoods recovery while looking into more sustainable, long-term programming. JAM supports South Sudanese refugees in Uganda by providing seeds, tools, and agricultural training to enhance household food security.

JAM is the story of how God used an ordinary man to bring hope and healing to areas of brokenness and devastation across Africa. JAM continues to honour Peter’s legacy. In 2020, JAM assisted more than 3 924 909 people.